Q: What is in the center of the Earth?
A: A month old plant. 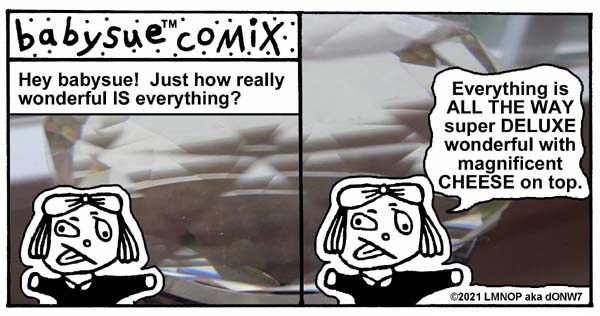 Q: How large is the universe?
A: It is seventeen miles wide.

Q: Why do people smoke cigarettes?
A: Because they like them.

Q: What is a vegetarian?
A: Someone who doesn't eat anything. 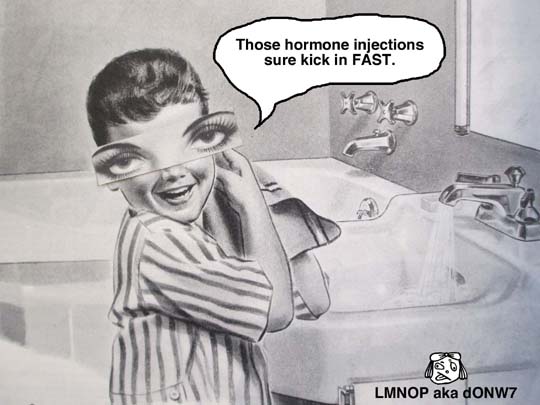 Q: What are clouds made of?
A: Codeine and iodine.

Q: What do you call a group of cattle?
A: Jennifer. 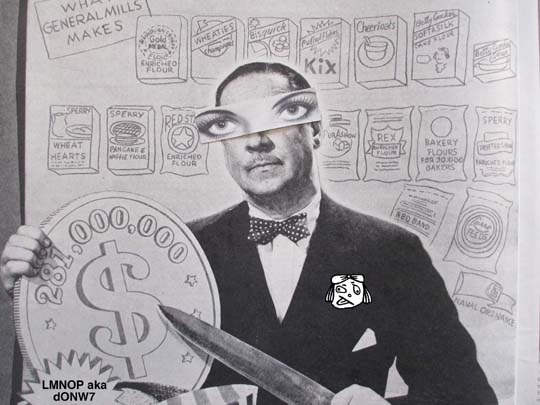 Q: What roads do chickens cross?
A: The wrong roads. 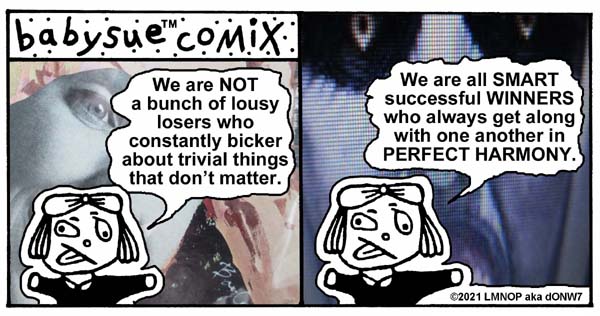 Q: What is the song "Power to the People" really about?
A: Simultaneously electrocuting large groups of people all over the world.

Q: What do failure and success have in common?
A: Everything.

Q: June Cleaver once asked her husband, "Ward, don't you think you were a little hard on the Beaver last night?" What did she mean by this?
A: June Cleaver was a thoughtful caring mother and she sometimes felt that her husband was unnecessarily strict and harsh when it came to rules and punishment. She was therefore trying to prompt her husband to soften up a bit because she cared so much for her youngest son. 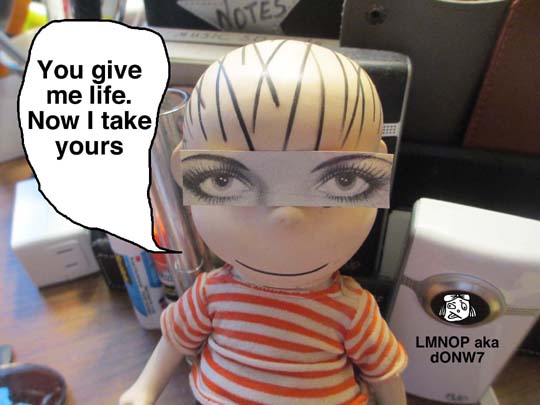 Q: What do you get when you set Pampers on fire?
A: Diaper ash.

Q: What topics are off limits in twenty-first century conversation?
A: All topics.

Q: When do people finally shut up forever?
A: When they die. 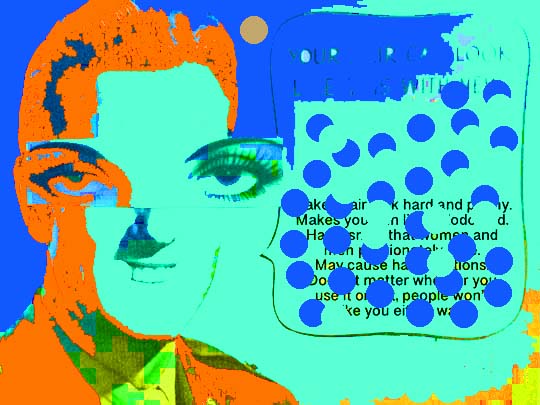 Q: Why are most people selfish greedy pigs?
A: Because that's the way people are.

Q: What is the best kind of holiday?
A: One that is over.

Q: What should you do with your career?
A: Destroy it. 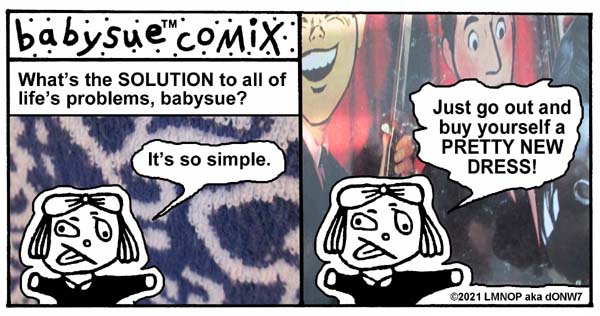 Q: How much money do you really need?
A: Ten bucks.

Q: What effect do yoga and meditation have on you?
A: They both cause you to become mentally ill.

Q: What do all occupations have in common?
A: They are all unnecessary.

Q: Is there anything left to discover in outer space?
A: No. 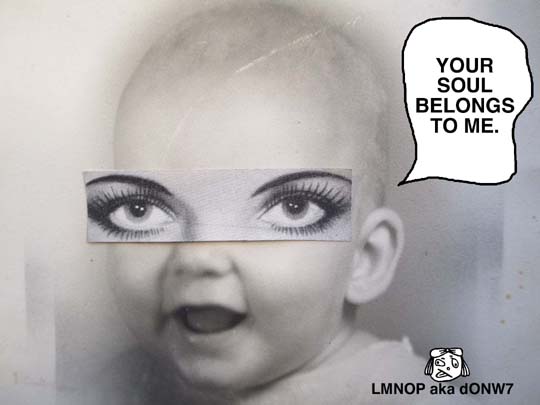 Q: How do people feel when they get in touch with their true feelings?
A: Anxious and uncomfortable.

Q: Is it possible to fall in love with an animal?
A: Yes, but it must be a very specific animal.

Q: Why does everyone hate to cook?
A: Because it is a complete waste of time and in a very short while you have nothing to show for all of your effort.

Q: How do men look when they wear leggings?
A: Ridiculous and horrible. 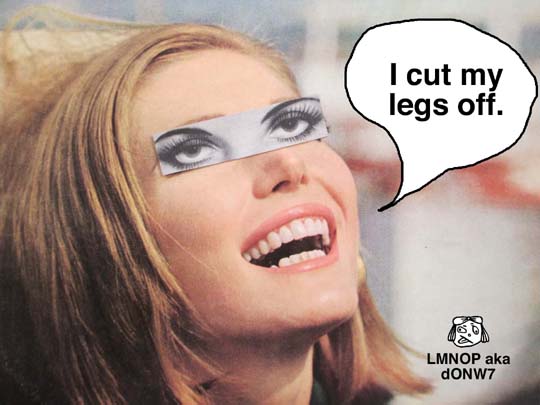 Q: What is a sacred piece of art?
A: Disposable.

Q: Why do happy bunny rabbits hop?
A: Because they enjoy jumping on bright green grass on a nice sunny day.

B
Bad Bump - Banana tread
Badfigure - Crooked down
Bambi Dambi - Lambi
Ballerina Pumps - Blackass
Barge - Limpy
Beadulls - Desmocker
Beatles - Medium
Beatles - Medium rare
Beatles - Rare
Beatles - Not as rare
Beatles - Stuff that was never recorded
Beatles - Stuff that we wish had never been recorded
Bee Numb - Numb bee
Beyonce - Sorry album
Beyonce - I can dance but that's about it
Beyonce - My face is ugly
Beyonce - Don't you get tired of hearing my stupid name all the time
Beyonce - I'm really a boring old hag
Beyonce - My fans have poor taste
Beyond the Beyonder - Blander and blander
Bjork - Jorky B
Black Tabitha - Pastor of senility
Blankets for Blankets - Laps
Blender in a Blinder - Fizzle
Bobo's Pretty Duster - Lamp off, lamp on
Davis Bowee - All the dumb dudes
Breezer the Flew - Like dazzlers in fume
Garth Brooks - I've recorded tons and tons and TONS of music
Garth Brooks - And yet you babysue folks have never reviewed ANYTHING
Garth Brooks - What is wong with you goddamn undergroud music snobs?
Garth Brooks - I'm rich, rich, RICH
Garth Brooks - If you've got lots of money, nobody cares if your voice is shitty
Bumps Fifty - West
Jenna Bush - Why does my face resemble the rectum of a pig?
Jenna Bush - Trying way too hard to be clever and cute
Butler Pudding - Lippity gris gris
Buzz's Lamp Cord - Tawny frink

C
Car Mump - Dazed and refused
Casket of Corformity - Laser dog
Cast of Cast - Lastly
Cat Grave - Mickey's laboratory
Cesula - Maid in martians
Chance The Rapper - Coloring book
Chicky Chicky Clock - Rump of the month slob
Chump - Malaria
Chunks of Paisley Pumps - Lordy the snore is a plaza burn
Eric Clapton - I still don't know what a guitar is
Phil Collins - No vocal skills required
Sean Combs - How come I never get reviewed in babysue?
Sean Combs - You don't like me just because I'm hugely famous
Sean Combs - Hey, I make a lot of money you underground jerks
Sean Combs - I'm rich, rich, RICH...ain't that what it's all about?
Sean Combs - Lookin' ugly for everyone
Come To Lulu's Nurse - Romp and the bumpy tum tum
Confederate Railroad - Happy to snort crystal speed
Conscious Or Not - Grumpy lazy
Crap You Like - Tape measure
Crosby, Stills & Nash - We were friends once upon a time
Crunchy Links - Switches and prawns
Miley Cyrus - How come I never get mentioned in babysue?
Miley Cyrus - I guess it's because my music lacks substance
Miley Cyrus - I wish I wasn't dull and boring
Czerchnkii - Dim

H
Hamster on a Bun - Heartache on a bun
Hamster on a Lettuce Leaf - Try to find something to stuff in your cheeks
Jennifer and Sarah Hart - Where did our love go
Jennifer and Sarah Hart - We loved Jesus very much
Jennifer and Sarah Hart - Happy together forever because we died together
Hay - Hay
Hazle - Measurements
Hell for Humans - Happiness is a dumb puppy
Help Me Help Me - Liver
Help the Hopeless - Bloody hearts get you nowhere
Hissy - Laserbon
Hitt - Dawn for the loud birds
Hizzers - Stuck
Whitney Houston - Howzuh bauwduh nuthuh drank?
Whitney Houston - You put water in my drink
Ian Hunted - Punts and nuttters
Husperate - ADN
Hut for Henry - Universe of sandy
Huzzle - Earlier albums

I
Ian - Jackknife
Icky - Picky, picky, picky
If It Dies Don't Touch It - I offered more than they wanted and they took it
If You Knew Nothing You Would Be Nothing - Drips
Inky Doll - Dampness and dryness
In The End The Beginning - Ridgefield
It Stays Warm - Square butter
IX Lamb Sweater - To each his each
IZZ - Each his to his

S
Larry Samual - Barney doesn't have hugs for me
Santa Died Last Night - Presenting...
Santa Did It - Lamenting
Ed Sheeran - How come I never get mentioned in babysue?
Ed Sheeran - It's because my music is crummy, isn't it?
Ed Sheeran - Why do I look and sound so crummy?
Ed Sheeran - Are there any questions that have answers?
Blake Shelton - Can't help it if I'm a boring dullard
Blake Shelton - If you're into what I do you're obviously on the wrong web site
Blake Shelton - If people think I'm handsome they must really be confused and retarded
Shotgun Louise - Rampy dim
Shotgun Tina - Lousy lamps
Shotgun Zappa - Mouses and mouses
Smashing Drumsticks - Pass the pepper
Smuppy - The tatters that ground pepper
Sparse - Kim's Ono spy mouse
Bruce Springsteen - The Crazy Boss
Bruce Springsteen - I'm a generic old woman now
Bruce Springsteen - Shallow songs that everyone can buy
Barbra Streisand - Barfing up my breakfast
Styx - Suite madame blue: Radio broadcast 1977
Sultans of Swing - Subcontinental drift
Swap and Change - Loudness weird
Swenter - Flowers
Taylor Swift - How come I never get reviewed in babysue?
Taylor Swift - Well, if your publicist would send something...you might.
Taylor Swift - Really?
Taylor Swift - Sure
Swy - Rent

Y
Yack Yack - Tacky tick
Yell All The Time For Whatever You Pay For It - Taxi service
Yellow Floyd - Park wide until noon
Yesterday's Potties - Damp portions
Yes We Will Be Bananas - Trap doors
Yes You - You guessed it
You might - Yes you might
You never - Well I never
Young and Bland - Stick, stuck
Yoyos for Panama - Sharp
Yoyos for Zop - Trollo mia presto
Yuck This Tastes Awful - Don't eat it then